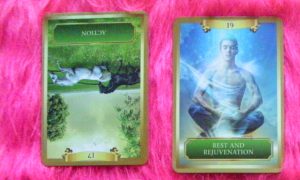 As a softer and sometimes lighter version of tarot cards, there are a few different schools of thought when it comes to oracle card readings and whether or not the practitioner should read the cards in reverse.

Or put a different way – the ups and downs of oracle card readings present a dearest darling dilemma!

Oracle cards being a modern alternative to tarot, in part have evolved in to the ever increasing standalone substitute that fortune tellers and guidance readers use for sessions with their querents. Or @ the very least some tarot readers use oracle cards as a side kick and extra “after eight” pick me up to lighten things up, particularly after a tarot consultation if it’s been especially difficult or shrouded with more dark than light.

So if for instance after a somewhat challenging tarot reading, the teller senses that their client seems a little agitated, perplexed and anxious after the session and hence decides to use an oracle deck … 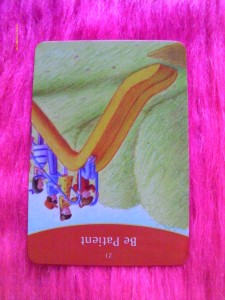 Such as The Answer Is Simple by Sonia Choquette (with 62 cards in total) to try and end the appointment on a more positive note. However they draw card number 21 Be Patient in reverse – then the practitioner would take the card to mean that their customer has of late been too patient,too tolerant and too enduring of a particular situation in their life (which has probably attracted the negative tarot reading in the first place!!!). So consequently the probable or by chance ups and downs of oracle card readings in this case has generated Be Patient in the downward aspect – thus from the view point of the tarot specialist – implores the querent to not be patient and instead to take action! 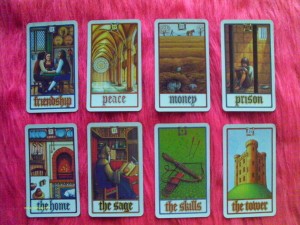 One of my favourite oracle decks is the Psycards created by Nick Hobson in the 1980s, pictorially they are reminiscent of tarot cards. The (40) cards include (friendship, peace, money, prison, the home, the sage, the skills and the tower card (similar to the tower in tarot but on the Psycard there are no people falling). 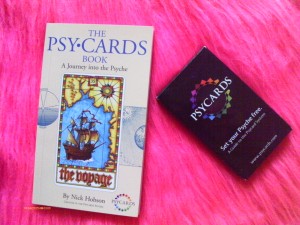 In his book The Psy Cards Nick Hobson instructs that the Psycards are not to be read in reverse and thus if a card lands that way, it is to be turned to the upright position.  While I absolutely respect Nick Hobsons viewpoint, particularly because these rather under-rated but beautiful cards emanated from his psyche (as well as Jungian archetype theory) There have been times in the past – albeit informally reading cards for friends and family – that I felt the Psycard made more sense within a 3 or 5 card spread to be read upside down if it happened to be cast that way, I took in to account the ups and downs of oracle card readings… 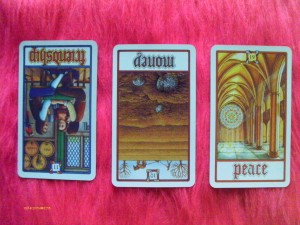 May = an important and meaningful friendship or family interaction that is being strained by money problems, perhaps money has been lent and the money needs to be payed back but the borrower can’t afford to pay the money back and it’s causing considerable strain and therefore is interfering with what was a peace – ful family or friendship relationship. Or perhaps some one has a gambling problem, however to restore peace and harmony an attempt ought to be made to either pay back the money in whole or gradually over time … 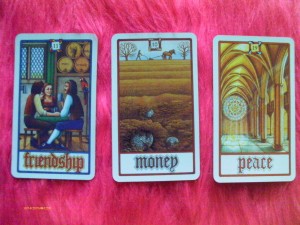 May = a financially orientated friendship collaboration that will bring about the harvesting and reaping of money if the friends work hard to bring about success they will achieve great peace, harmony and stability in their lives, however the friends must always do every thing they can and to be mindful to keep the peace while working hard to realise their collective enterprise because there could be times when they may be faced with stress which can impact on friendship when mixed with business …

Sometimes as an oracle card reader you have to go with the flow and not be too constrained with the do’s and don’ts of a system of telling and interpreting, go with what ever feels right and intuitively surfaces in your mind! 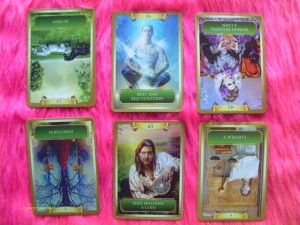 Lastly I will mention the Energy Oracle Cards by Sandra Anne Taylor.

I bought this absolutely fabulous deck (of 53 cards) precisely because she purposely considered the ups and downs of oracle cards readings by designing these cards to be read in reverse if a card appears that way in a spread, plus she also gives the reverse meanings in the accompanying guide book. Some of the cards include action, rest and rejuvenation, woman holding a coin, man holding a coin, indecision and contract – the upright and upside down positions and meanings of these cards in a spread are not too difficult to intuit upon and are some what self explanatory!!!

Pin me UP Scotty x

Billy Sunday The world is wrong side up, it needs to be turned upside down in order to be right side up